Care workers have recently been reprimanded by CQC for calling old people affectionate names like ‘sweetheart’, ‘love’ and ‘darling’.

They’ve said the labels are patronising and demeaning and the care home in question was marked down as a result. They ended up with a ‘requiring improvement’ grading.

Care workers argue that the use of these names make the older people feel loved. I really couldn’t agree more.

Over half (51%) of all people aged 75 and over live alone and two fifths of all older people (about 3.9 million) say the television is their main company.

But isn’t this more about dignity and respect, not what we actually call older people?

What this is really about is respecting the individual and asking them how they wish to be addressed and following their wishes. It’s all about effective use of communication. At their time in life it’s about feeling comfortable and loved.

This is also about local dialect. ‘Love’ and ‘duck’ is used extensively throughout Yorkshire, even by total strangers when communicating. You’ll hear the terms from shopkeepers, bus drivers, all sorts of people – it’s common currency and it’s how we are up North! We are a friendly bunch. If we were more formal, wouldn’t that be cold and unwelcoming?

At Broomgrove we are a family and we talk to each other as a family would. Some of the residents call the staff ‘Sweetie’. The important issue is that people are called what they want to be called. Some will really appreciate affectionate terms of endearment, others will not.

Broomgrove is set to back a project to build a school in the hometown of one of its most popular workers.

Residents knew nothing about the double-life of Zambian-born care worker Francis Sukwa and were left speechless when he told them about his ongoing work to open a primary school in his hometown of Mufulira, a town in the Copperbelt Province of the country that is suffering crippling poverty and unemployment.

He has spent every waking hour raising funds and travelling back and forth to Zambia in his time off to head up the ‘M-Shining Star Tutorial School’ project.

Francis Sukwa’s tireless passion means the school will be fully open by January 2016.

Donna Pierpoint, Broomgrove manager, said: “I invited Francis Sukwa to talk about his project at a recent residents’ meeting and he totally silenced the room – everyone was in awe of what he was doing and what he’d already achieved.
“Residents have decided to start raising money for the project and I’m all for it.”

Francis Sukwa said: “Nearly 50% of Zambia’s population is aged under 14 and education in the country is deemed a privilege rather than a right. Raising my own children in Sheffield where education is a right has shown me the kind of standards I need to aim for.”

Any donations are gratefully received and should be sent c/o Donna Pierpoint at Broomgrove (d.pierpoint@broomgrove-trust.co.uk)

Eight members of staff have landed places at university this autumn!
Residents and staff organised a party to say farewell to the individuals that are leaving to pursue a number of different roles in the healthcare industry.

“Thankfully we already have staff to take their place, as we have a rolling programme of students joining and leaving us.

“Three of the people leaving are going to medical school, three to nursing, one to midwifery and one to radiology”.

Many students continue to work at Broomgrove Nursing Home and do ‘bank’ shifts in between their studies.

We enjoyed a facinating talk from Sheffield University’s Health Services Researcher Dr Sheila Kennedy and PhD student Louise Newbould recently. They came to speak to residents about research projects they’re working on which include an ‘intelligent shoe’. You can read all about the visit on Dr Sheila Kennedy’s blog: 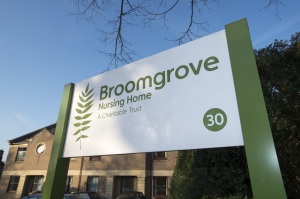 My care home residents have always been painfully aware their influence starts and stops inside Broomgrove Nursing Home. But a recent speaker was a true revelation for us.

Melanie Rice came to talk to us about exciting opportunities that mean residents can now influence the shape of services provided for older people in the city. She works in the Council’s Communities Department.

A new Care Act was introduced on April 1st, 2015, which makes changes for Adult Social Care. The Council is keen to involve more service users in the decision making process about priorities for the future and plans to improve and develop services in adult social care.

I’m glad to say the council seem very far ahead of the game. Melanie told us about the varied ways for people to get involved. But at the moment there aren’t many care homes involved in the process so I’d suggest others take the opportunity and contact her.

Hence why the council were so keen to visit us and get us involved. Something we’re all too willing to do! The Council regularly take a lot of flak – they’re doing some great stuff here.

There are five different forums that service users, care home residents and their families can now be involved with (people can also choose to access information remotely and send their comments digitally):

There will soon be a forum for Family Carers to discuss issues affecting them and make improvements to services. And there is also a Citizens Reference Group that involves people with plans across Health and Social Care.

To find out information about any of these opportunities, Melanie and her colleague Christina Shipley can be contacted via email at  PracticeDevelop@sheffield.gov.uk  or you can contact the team on telephone number 0114 2930037. You can also find out more by visiting the Council website at: https://www.sheffield.gov.uk/caresupport/involvement-engagement.html

My 94-year-old father receives care and attention that is absolutely brilliant. The staff cannot do enough for the residents and they are all cheerful and very friendly.
It is such a relief for our family to know that he is safe, well and also entertained as we experienced another care home where this was not the case. He has actually improved in several areas since moving here (eg ability to feed himself). I would definitely recommend Broomgrove- it is at the higher end in terms of cost but if you/your relative can afford it, in my opinion, it’s one of the best.

My Mother spent 5 and a half years in the care of Broomgrove Nursing Home. I was delighted with the love and care that she received. She had a beautiful room which was bright and cheerful and there was room for many of her personal belongings which made it very homely. Whilst my Mum was able, she enjoyed taking part in the many activities which were laid on for the residents and so her mind was kept busy.
Until the pandemic hit I was able to visit as often as I liked. I was always treated with kindness and respect and found the staff very helpful and accommodating.
I can't thank everyone enough for the positive difference that Broomgrove made to my mother over the course of her long stay.