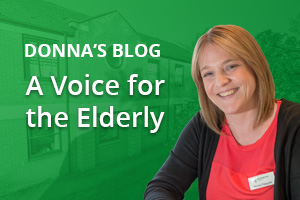 Broomgrove manager Donna Pierpoint cares passionately about the lives of older people and champions their cause via her regular column in The Star newspaper and this blog. Tell her your views and join in the conversation!

Yes, they are more prone to hospital admissions due to their higher risk of falls, infections and general deterioration in medical conditions.

But no elderly person wants to be in hospital in a strange environment. They often can’t hear, see or understand the staff. All they want is to get better and go home!

Department of Health statistics show more than 680,000 elderly people are admitted to acute hospitals each year. They regularly languish on wards even though they are well enough to be looked after in a care home or at home with support.

The Government have promised a £300 million ‘rescue’ package to allow Social Services to buy care, but this is only a drop in the ocean.

50,000 care home beds have been lost over the last 5 years and care homes are closing at the rate of 4 per week. This is mainly because they are unable to meet the standards of care required by the CQC. Neither the NHS or Social Services pay care homes enough to be able to provide the high standards of care that the elderly deserve or CQC requries.

More intermediate care beds would help the situation but this comes at a time when community hospitals like Bakewell and Bolsover are due to close. These hospitals provide care whilst the elderly wait for either a care home bed or for a care package at home.

It costs £400 per day for a hospital bed. Is it just me or is the answer to bed blocking to use this money and save our community hospitals and pay more money towards care home beds and care at home? 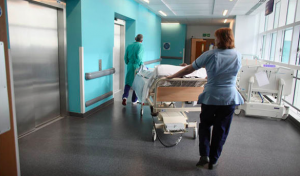 NHS, I think you have the answer to the bed blocking crisis.

Donna Pierpoint is the manager of Sheffield’s renowned Broomgrove Nursing Home. She has 20 years experience in the sector, a decade of those as care home manager.

Crime Commissioner Alan Billings recently came to talk to our residents about how to tackle the growing problem of scam phone calls.

Quite a few of our residents have their own landlines and have received junk phone calls in the past. They have now all registered with the phone preference service to stop the marketing calls and they know what to watch out for. But they are, sadly, in a minority.

We have a growing elderly population, they are vulnerable and need to be alert to possible scams, especially ones made over the phone. Fraudsters target the elderly and even have to guts to pretend to be the Police, Council or Bank. They are convincing, conniving and are likely to come armed with information that makes them seem tototally genuine.

A 65-year old gentleman was scammed out of £12,000 recently. The fraudster purchased an 0845 number and stated he was from their bank. He left the number with the victim which, when dialled, was diverted to the scammer’s mobile phone. During the conversation the scammer managed to get the victim to divulge bank details, security information and PIN. The scammer then persuaded the victim that their account was at risk and a courier would be arranged to collect his bank card.

You may have read that and wondered why the gentleman didn’t suspect any harm, but these scammers can be very clever and so convincing that an elderly person could easily think it was genuine.

What can we do to help stop these con men and women robbing our elderly relatives?

They can sign up with the Telephone Preference Service to prevent marketing phone calls. Contact 0845 070 0707, or go to www.tpsonline.org.uk.

We must also ensure they never give out personal details over the phone; never send money to anyone they don’t know; don’t open the door to someone they don’t know; always ask who they are speaking to and verify the information by calling a company’s head office.

Remember, if it sounds too good to be true, it probably is. Scammers are clever, they will do their homework and will often know huge amounts of information about the people they are targeting.

For more information, contact South Yorkshire Police and ask for ‘The Little Book of Big Scams’. This booklet has invaluable information on all kinds of scams and how to avoid them.

Did you know that this county has an invisible army of older carers that are saving the Government billions every year?

New figures released by Age UK in May 2016, show that older relatives who care for their loved ones, save a massive £5.9 billion a year with their provision of unpaid care.

The majority of them provide care in their own home for more than 35hrs a week.

Help with care is available, but this is to a maximum of 4 calls per day, generally between 30-60mins each time.

This still leaves 20hours a day that the elderly carer has to look after their loved one.

They are also left on their own to manage through the most vulnerable time of the day – overnight.

It begs the question – who is caring for the carer? Who is supporting them? Who is giving them a rest? Who is there to provide and fund respite care?

Older couples try to manage living at home for as long as possible and lean on each other for support. It’s a natural thing to do.

But more needs to be spent on supporting them to do this – especially when one half of the couple if caring for a partner that is less able than themselves.

They care for a loved one because they are wholly committed to that person. There is often little alternative-  but they can’t do it all on their own.

By not providing support we are taking advantage of their determination to do right by those they love.

At Broomgrove we offer respite care, to allow the carer to have a well deserved break and recharge their batteries but we are now in a minority.

We are now one of the only homes that offer this as most can’t afford to keep short term bed space available following the financial impact of the living wage.

Action is urgently needed to ensure older carers have the support they need and are not left caring alone by a shrinking support service.

What is the secret to a long, healthy and happy life?

Well I don’t profess to have the answer to eternal youth but I have worked with elderly people for the past 22 years so I know a thing or two!

There’s no doubt that genetics play a key part. If either of your parents suffered from a medical condition there is a higher chance of you inheriting these predisposing factors.

But if either of your parents lived well into their 90s there’s every chance of you following in their footsteps.

That’s as long as you lead a relatively healthy life… I say relatively as looking back over the lives of our parents and grandparents throws up more than a few questions and quandaries.

Think about someone you know in their 90s and think about the kind of life they’ve led since they were born way back in the early 1920s.

There was no such thing as skimmed milk, reduced fat butter, sugar free drinks, diet this and diet that.

The rind on the bacon was the best bit and a dripping cake was a real delight.

They played outside in the mud and didn’t wash their hands before they came in for a sandwich. There were no such things as Playstations and XBoxs.

Leisure time was spent outside in the fresh air.

They endured six years of war following the German invasion of Poland in 1939. Nearly a tenth of Sheffield’s population was made homeless in the blitz of 1940 that followed, hundreds died.

Rationing carried on for years after as did National Service.

The ‘keep calm and carry on’ was a mantra that seemed to stay with them for  a lifetime.

They just got on with life and worked through whatever was thrown at them.

It’s hard to imagine how they had the strength to keep going as the country braced itself for German invasion in 1940.

We recently at Broomgrove celebrated the 100th Birthday of one of our residents – Betty Richardson. I asked her what she thought the secret to a long life was. She said it was having her Mother and Father’s positive attitude to life, her strength and her faith.

So what is my answer to the secret? It is to keep fit, eat well, drink well and enjoy life!!

Care workers have recently been reprimanded by CQC for calling old people affectionate names like ‘sweetheart’, ‘love’ and ‘darling’.

They’ve said the labels are patronising and demeaning and the care home in question was marked down as a result. They ended up with a ‘requiring improvement’ grading.

Care workers argue that the use of these names make the older people feel loved. I really couldn’t agree more.

Over half (51%) of all people aged 75 and over live alone and two fifths of all older people (about 3.9 million) say the television is their main company.

But isn’t this more about dignity and respect, not what we actually call older people?

What this is really about is respecting the individual and asking them how they wish to be addressed and following their wishes. It’s all about effective use of communication. At their time in life it’s about feeling comfortable and loved.

This is also about local dialect. ‘Love’ and ‘duck’ is used extensively throughout Yorkshire, even by total strangers when communicating. You’ll hear the terms from shopkeepers, bus drivers, all sorts of people – it’s common currency and it’s how we are up North! We are a friendly bunch. If we were more formal, wouldn’t that be cold and unwelcoming?

At Broomgrove we are a family and we talk to each other as a family would. Some of the residents call the staff ‘Sweetie’. The important issue is that people are called what they want to be called. Some will really appreciate affectionate terms of endearment, others will not.

Rarely do superlatives such as “first-class”, “outstanding”, “excellent” and “wonderful” apply unequivocally. Broomgrove merits them and more.

Senior management are “hands-on” and always available to talk.

Broomgrove's care ethic is that everyone has a positive “can-do” attitude.

“Behind the scenes” staff, the kitchen, laundry, the garden/DIY, the cleaning staff all contribute to an upbeat environment.

Mum was able in her last years to feel secure, content, pampered even and above all loved.

Broomgrove responded sensitively to mum’s changing needs. Flexibility was demonstrated in regard to meals, outings and activities.

We would unhesitatingly recommend Broomgrove Nursing Home and can confidently say that our mother could not have wished for more in her final days. Nor could we for her.

Mum has been staying at Broomgrove for the last 3 months following a hospital admission. We were so lucky to find such a welcoming and well-run nursing home at such short notice. It has worked out so well for Mum who has settled in really well. Every member of staff we have met is friendly and caring. Like all families we had some concerns about Mum going into a home, I would reassure anyone thinking of using Broomgrove, I don’t think you could a better home from home anywhere else.