Few care homes have the history or reputation to match Broomgrove.

Plans for the trust were first unveiled in 1962 and Broomgrove opened its doors in April 1963, the same month the Beatles’ played arguably their most famous show in Sheffield; the sold out performance at the Azena Ballroom in Gleadless (better known these days as the Co-op!)

Broomgrove’s connections with the ‘Fab Four’ don’t stop there; the marriage of Brian Epstein’s mum and dad took place just a few hundred yards away at the Wilson Road synagogue thirty years earlier.

We mention the group because entertainment and the creation of a stimulating environment for residents are one of things that really make Broomgrove Nursing Home stand out. 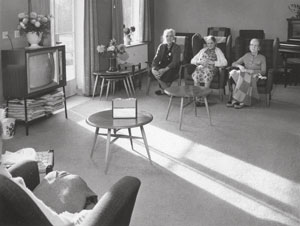 The home was officially opened by the Bishop of Sheffield in June 1964 and has been at the heart of the local community ever since.

The ribbon cutting for our latest unveiling, the 2012 refurbishment of our reception area, dining and sitting rooms, was carried out by inspirational pensioner, Ruby Gascoigne.

The 89-year old was one of four women who successfully took their campaign for recognition for the thousands of local women that ran the steel mills in World War Two to 10 Downing Street.

Over the years Broomgrove has provided high quality care and support for thousands of people. We are very proud of our distinguished history and look forward to delivering care and supporting the local community for the next 50 years!

There is a calm atmosphere at Broomgrove where residents, staff and visitors mix happily and respectfully. The carers are personable, hardworking and very professional. The support staff make everything run smoothly. The nurses are knowledgeable and approachable. Management is always trying to make life more comfortable and enjoyable.

The rooms and shared areas are light and airy. The dining room and food get a lot of attention. The menu is healthy, flavoursome and chef is imaginative. Something or someone is always being celebrated. The garden is lovely weather permitting.

There are individual and group activities with dedicated organisers, who provide for a range of interests and bring in outside performers and speakers.
As a charitable trust, the home gives confidence in its care. There’s always a monthly residents’ meeting with a trustee. We are consulted and kept informed about personal care and the home more generally.

Our dad is safe, cared for, relaxed and “at home”.

My aunt has been a resident at Broomgrove for nearly ten years and whilst she has many challenges physically, her intellect is as sharp as ever. She's always felt totally at home at Broomgrove. I visit her regularly and she's always full of praise for the care and professionalism of the staff. The home always has a relaxed and happy vibe and the staff always go the extra mile to ensure she's as comfortable as possible.