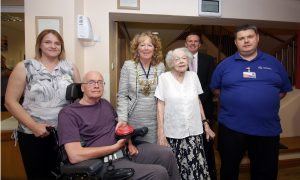 My Dad moved to Broomgrove in December 2018, after a really difficult three months in hospital. He could not be in a better place. Despite the changes that the medical issues brought to his life, thanks to the quality of the care and the attention to detail showed by the manager and her staff. He quickly settled into his "new life" and he really is appreciative of the care, consideration and respect he receives. The home has a lovely atmosphere and an ethos that makes it very special. Everything is well organised, the accommodation is spotless and the staff are so kind and clearly committed and experienced.
It's a real pleasure to visit Dad at Broomgrove and to see him relaxed and smiling. Every day I feel thankful for the care and attention shown to him by the manager and her staff. Wonderful.